I am religious and rely on God and his son, Jesus Christ, in nearly all aspects of my marriage. So I have been wanting to write about how religion influences my marriage. This week as I have been thinking about Easter and Jesus Christ’s Atonement, I have been focused on his actions from his time walking among us on earth: the examples he set of kindness, righteousness, and love. These qualities he displayed have become known as “Christlike attributes” and although there are many attributes that I could apply in my life, there are a few specifically that have been most applicable to my marriage that I wanted to point out.

Christ taught us to forgive 70 times 7. Even really bad things like being betrayed by a friend resulting in him being crucified. Forgiving someone doesn’t discount the hurt you may feel initially, and it doesn’t mean you immediately trust that person again. But it does mean that in order to reach trusting them again, you have to move passed the offense. I have found that in marriage there are sometimes little arguments we have that really don’t matter yet we choose not to let it go. After talking frustratedly with each other after awhile, sometimes a thought comes to my head, “You know what, I realize he didn’t intentionally do that to me so why am I so upset over it? I know we are on the same team in for the long haul, so I need to let this go.” Just having a wider perspective of our relationship as a whole helps me see that this little issue isn’t going to alter our love for each other, so forgiving each other and sometimes even forgetting it is really the answer. 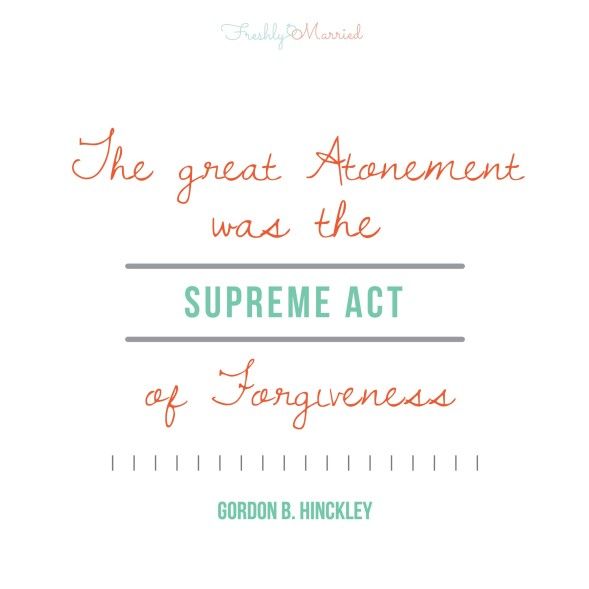 I think this means that when your spouse is wrong about something you let it go rather than saying, “WELL, TOLD YA SO!” It’s especially hard not to say anything when they get cocky about it, haha. It reminds me of MANY times when this is demonstrated in the TV show, Modern Family. The mom, Claire, went back to work full-time but wants to do everything she did as a stay-at-home mom. So Claire not only devises a plan to make it seem like she can run a company and run a bunch of errands for her kids, but she also rubs it in her husbands face a bit. It shocks Phil, her husband, and he finds out that Claire’s assistant was actually doing all those extra mom things! Instead of being mad at her for making him feel inadequate as a father, he just humbly starts helping her make dinner not even addressing what she did. He could have totally held that against her and made her feel crappy for lying to him but instead he decides to help her out when she attempts to do it all without her assistant’s help. She knew he knew, and she already felt bad about it, so she was grateful when he passed over the chance to scold her for it. That is great humility there!

The thing about Christ is that he never says, “WELL I TOLD YA SO!” even though he totally could. So many times he saw people around him doing wrong though he would preach to them the right. And then when their wrongs got them into trouble, he didn’t turn his back on them, nor did he gloat that they should have listened to him in the first place. Instead he lifts them up, he takes care of them, and forgives them. I want to strive to be more like this in life and in my marriage.

Another example from Christ of being humble is not seeing himself as superior to others! His apostles would be confused when he put himself on the level of a beggar or a sinner, especially when he let a sinful woman wash his feet. I think this is a big action of humility considering he is the Son of God; a perfect person; and in all regards should be considered superior to everyone else!

In applying this example of humility to marriage, it’s so important that we don’t see ourselves better than our spouse. It doesn’t matter if only one of you has a college education. It doesn’t matter if one of you works more hours than the other. It doesn’t matter if you think you’re right the majority of the time. (It kind of goes back to a post I wrote a few months ago about not competing against your spouse. Go read that post if this is an area you struggle with.) There shouldn’t be a competition because you each have certain talents, qualities, and knowledge that you bring to the marriage.  Just like the Modern Family example above, it’s not right to make your spouse feel inadequate as a person, a spouse, or a parent.

None of us will be perfect like Christ was. It’s not meant to be that way. However, His sacrifice for us through the Atonement makes it so we can fall short or mess up and still be counted as a beautiful child of God. It makes it possible for us to recognize and learn from our mistakes, then ask for forgiveness. I like to think that we can have the same “deal” between our spouses! That we can make a mistake and be forgiven for it; that we can fall short and our spouse will still be there by our side, just like Christ will.

I believe that Christ is the greatest example we have of what it’s like to be a giving, kind, and unselfish spouse. Happy Easter everyone :)

What Christlike attributes do you see present in your marriage?