From about September to December, I really struggled emotionally with social media. I fell into some common pitfalls of comparing my life to other people’s lives, questioning how “real” people were, and spending more time being involved in it than I should have (though I wouldn’t say I was addicted). These things were lowering my self-worth, and making me feel ungrateful. I snapped out of this phase and realized some important things that have made me and my marriage happier. I figured out why I was feeling this need to be involved in social media as often as I was; I realized that people are not always who they appear to be; and I also saw how social media was affecting my marriage. I know I am not the only one who has experienced this or is currently experiencing this. So I’m sharing what happened to me, how it affected my marriage, and how I got out of it in hopes that it will help you and/or your marriage :) 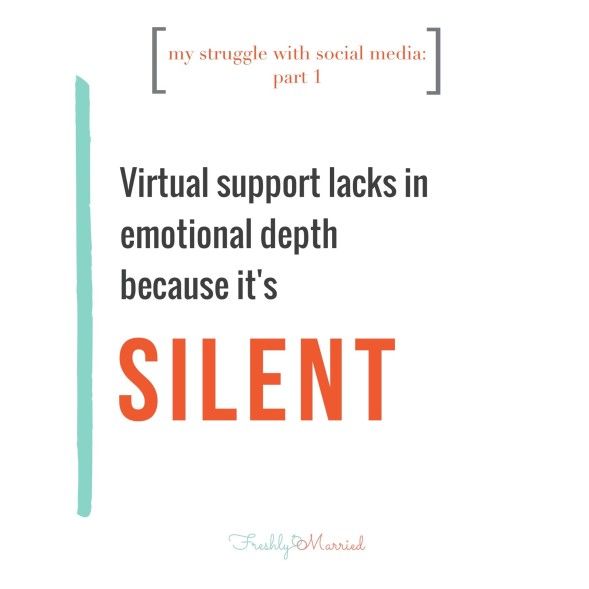 Social media affects us in one way or another despite how involved we are in it. The biggest thing we need to remember is that we can control how it affects us. I think it depends on a few things: Your attitude towards social media (Do you like it? Do you hate it? Do you think it can be useful in many ways?) and what you do with social media (Do you contribute (posting, tweeting, commenting) often? Is what you are contributing more positive or negative?). I think more importantly, it depends on what is going on in your life at the time.

When you have a better outlook on life and have a more positive self-image, I think social media can affect you less negatively. You don’t get trapped in the typical social media pitfalls like comparisons or letting negative comments that can bring you down. When the pitfalls of social media got to me the most, I was going through multiple changes that left me stressed and sometimes depressed most days.

We bought a house and moved from our married student apartment complex in Provo, to Salt Lake county. What a blessing it is to be able to have a house. It was such a positive thing we were doing by moving closer to Trevor’s work and beginning a more stable life. While I was happy about it, I also was worried about the change. I was worried about leaving our friendships behind, even though we could still drive to see them, and I was worried about making new friends. Things just change with a move, especially moving out of the college town.

It’s also different moving into a neighborhood full of families, when we are just a newlywed couple with no kids yet, haha. I had to start with a new pool of friends, while trying to keep our other friendships going. With the other life stresses I was experiencing in getting settled into a house, having health concerns, and keeping up with my school work, I definitely needed a stronger outside support system than just my husband, a few girlfriends and family.

Social support groups are more important than we think. Those groups can be our co-workers, work-out groups, neighbors, ward, family, and of course our friends who may not fall into those categories. Since I hadn’t established a solid support system in my new area yet, I seemed to turn more and more to a virtual form of support groups - social media. It was probably the wrong thing to do. Virtual support lacks in emotional depth because it’s silent. Our words become less authentic in this way. Seeing someone comment on, or like one of your photos is a silent act that is too easy to do. It’s so easy that it may not be as genuine as a compliment in-person might be.

How it got to me

I feel very blessed to be able to focus on finishing school right now without having to work. So I’ve been at home more. As we all know, even though we can be so busy, we still seem to take a minute here and there to check updates on instagram, facebook, and twitter. Those minutes add up :) Well this was happening for me and it was happening often throughout the day: before getting out of bed in the morning, before falling asleep at night, while waiting for my lunch to heat up in the microwave, or just even after sending a text message to someone because I was already on my phone. I know this sounds familiar to some of you!

The more glances I took at social media, the longer I kept looking. The longer I kept looking, the more I wanted to be involved; commenting or posting myself. The more posting and commenting I did, the more I checked up on how many people liked it, or commented back… so on and so on. This progressing habit leads us to be more virtually involved in each other’s lives. It can be a good thing for our close friends and family who we truly do care about what’s going on in their lives. But what about those acquaintances sitting in our “friends” section? Granted, some of them don’t appear much, but for the ones who seem to pop up in our news feed all too often, do we really care about everything going on in their life? There are repercussions from being involved in everyone’s lives so much…

To be continued in Part 2…