This is a common catchphrase in religions, even though it might not be a guarantee. While I believe praying is a powerful tool in marriage, it doesn’t necessarily guarantee a couple won’t get divorced. However, it does pull a large weight when it comes to feeling high marital quality.

I came across a recent article not too long ago from the Institute of Family Studies about how influential religion is in a couple’s marital satisfaction. This particular study found that couples who attend church together regularly are more likely to report having a happy marriage. Furthermore, it also found that “shared prayer is even more strongly associated with higher relationship quality than shared religious service attendance.” I found this all to be very interesting, and something couples should know about!

Why I found it interesting is because the study found that their religion of choice didn’t even matter that much when it came to these results. Even if they attended different religious services, marital satisfaction was linked more towards their activity level together in their religion and their consistency in praying with their spouse.

Putting my strong beliefs aside for a second that God can empower your relationship, I think these results reveal a lot to us about commitment. When spouses see each other show a commitment to a higher power by being active in their church and praying as a unit, I think it reflects the level of commitment a spouse will give to their marriage. That feeling is very comforting and secure. I think that’s what ultimately leads a couple to feel stronger relationship quality over couples who don’t do these things together. 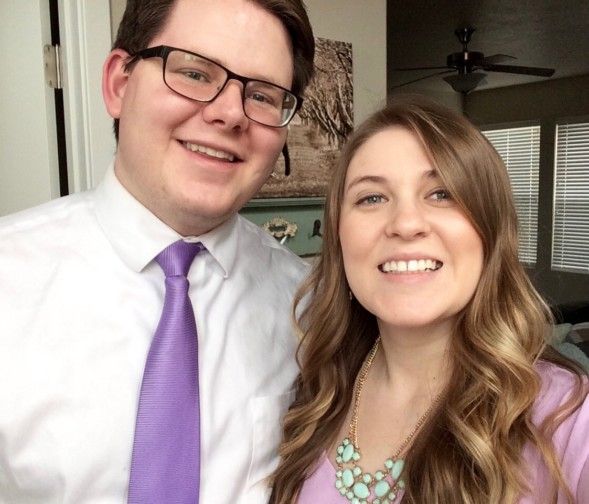 Not only do we like to go to church together, but we also like to try and match our clothes as if we are prom dates or something ;)[/caption]

Two ways praying together has helped our marriage

One of the ways I know praying together helps our marriage quality is hearing each of us pray for each other and have concern for each other. It can be a confirmation to you that they have listened and tried to understand your struggles. And it’s also admirable when they pray for other people who are struggling because you see that they aren’t just focused on themselves.

Another way that prayer helps us in our marriage is when we are in the middle of a tiff. All the feelings tiffs bring like frustration, sadness, shame, pride, and confusion can push us away from each other. However, when it comes time to go to bed and do our nightly routine of saying our prayers together and individually, we almost always do that still. Our prayers together might not be as long, we may not hold hands as tightly, but somehow we still come together for this act despite feeling frustrated or hurt with one another. And even if we feel uncomfortable praying after a tiff, somehow it softens at least one layer of our hard hearts, leading us one step closer to resolution and making up :)

To me, praying together, especially after a dispute, gives me hope and almost a sigh of relief. Many couples after arguments will avoid doing things together, or avoid being in the same room to the point that one of them sleeps on the couch. So if we can still say at the end of the day, “I still want to sleep in the same bed as you and even pray with you,” it can be very comforting. It gives me the feeling that we are both committed to overcoming this obstacle, and better yet, we are both still committed to each other. :)

Whether you are religious or not, I hope you found this relatable somehow to your marriage, or at the very least enlightening!