Hi. We are married and we both wear pants.

That sounded funny huh? Well I’m just making fun of the stupid saying “Who wears the pants in your relationship?” because I hate it. Last time I checked we both wear pants, except on Sundays when I’m usually in skirt or dress ;) But seriously, though! I know it’s said in a funny and teasing way, almost sarcastically. However, remember, the thing about sarcasm is that there seems to be a little truth beyond its intentions. So when people say this in TV shows, movies, and among social circles, they are implying that one spouse has a more superior stance in the marriage. When one person in the relationship makes the final decisions all the time or even makes decisions without consulting the other person, that’s not right.

When you think about it visually, if only one spouse is “wearing the pants,” the other spouse is off to the side naked, haha. I know that sounds funny but I’m being serious! They aren’t doing much to participate because there is only so much you can do without pants, right?! I don’t believe marriage should be this way!

Since it doesn’t make sense literally to share a pair of pants, haha, Instead, I’ll just say that it’s important to remember that both spouse’s opinions matter. One spouse is not better than the other. Your spouse has a voice and that voice deserves to be heard.

So just to clarify, no one person “wears the pants” in our marriage, we both do. :) And if you dare tease me with that phrase, you’ll either receive a fiery lecture right then or a link to this post shortly after ;) And my final words of advice… 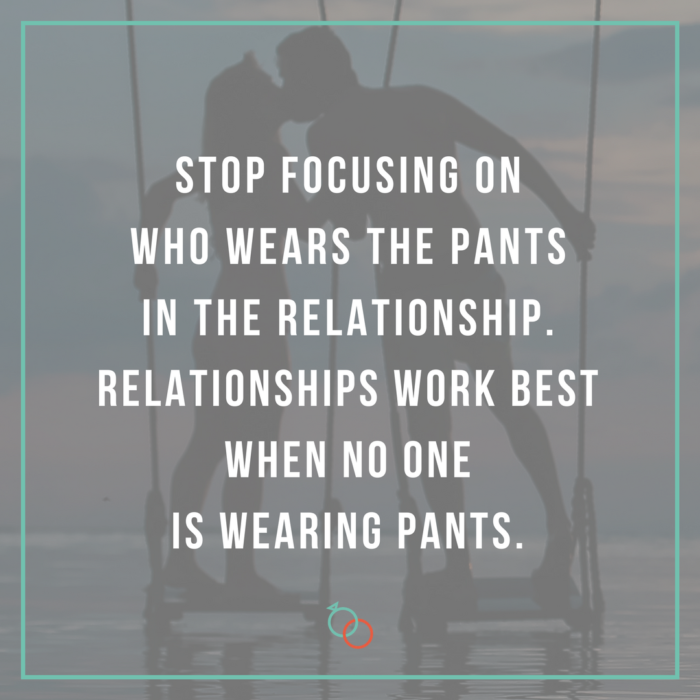